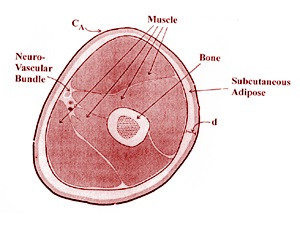 Besides that,  it is assumed that there is an equal distribution of fat around the arm and that there is a constant amount of bone compared to the muscle area. The upper arm fat mass (F), also measured by upperarm circumference and the triceps skinfold (T), provides a better assessment of the total body fat mass compared to a single skinfold measurement. The thickness of the triceps skinfold and the area of the upper arm decreases if the patient has malnutrition. Repeated measurements can give us an indication about changes in body composition and nutritional status of the patient.

A.R. Frisancho (1981)  has published tables with percentiles, which can be used to compare the measured values with the values of a general population. Therefore, when a patient's percentiles are low, he/she belong to the group of skinny people. McWhirter (1994) demonstrated in his research that an upperarm muscle circumference below P15 indicates malnutrition, and a value below the 5th percentile points to severe malnutrition. These values are, however, not a very reliable measure. When a patient has a constant upper arm muscle circumference (f.e. p60) and it drops to P50, malnutrition is a possibility although the muscle circumference is not below P15. The change in time is a better measure for the nutritional status.

A disadvantage of this method is that the results are not reliable in patients with oedema in the upper extremities, or people who are immobile because of  a muscle disease.

Measurements of the upper arm circumference and triceps skinfold are easy, cheap and not painful for the patient.  The middle of the right upper arm is measured with a measuring tape (Frisancho):

Reference values for upper arm circumference, upperarm muscle circumference and triceps skinfold are also published by Jelliffe (1966) and are often used as a reference. However, these reference values are often criticised. The references published by Frisancho (1974/ 1981) were recommended, because these were taken by a more representative population. A comparison is made by Harries (1982) and showed that there is no similarity between the two, therefore it is important to mention which reference is used. According to Ravasco's article (2002) upperarm circumference is a useful tool to determine the nutritional status of ICU patients. The criteria from Mcwhirter (1994) and Blackburn (1977) were used. Muscle mass was measured on the non-dominant arm and was classified in three categories: normal, middle and severe depleted.

The reference values can be found in the tables below, containing the percentiles (source: A.R. Frisancho, 1981).