A skinfold caliper is used to assess the skinfold thickness, so that a prediction of the total amount of body fat can be made. This method is based on the hypothesis that the body fat is equally distributed over the body and that the thickness of the skinfold is a measure for subcutaneous fat.

The sum of four skinfolds

To estimate the total amount of body fat, four skinfolds are measured:For this measurement the patient must be able to sit or stand in an upright position. Skinfold measurements are cheap, not very painful and easy to perform, although practice is required. With the table of Durnin en Womersly (1974), the percentage of body fat can be read by a given age and sex. This table contains data for people aged 17 years and older. More information on skinfold measurements can be found in this article. 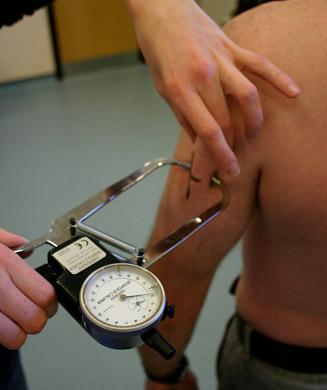