According to the Espen Guidelines a severe risk on disease-related malnutrition occurs when  at least one of the next criteria is met: More information:

In an article of P. Soeters et all in Clinical Nutrition (2008) malnutrition is defined as: ‘’ A subacute or chronic state of nutrition in which a combination of varying degrees of over- or undernutrition and inflammatory activity have led to a change in bodycomposition and diminished function’’. Important in this definition is taking into account the degree of inflammation.

A difference must be made between chronic and acute malnutrition.The chronic form may occur in patients prior to hospitalisation as a result of disease or medical conditions that lead to low energy and protein intake and poor food choices. During hospitalisation the acute form may occur as a result of reduced or absent food intake due to illness, drug therapy or depression. Moreover, the acute form may also occur from increased energy expenditure in hypermetabolic states such as trauma or surgery. 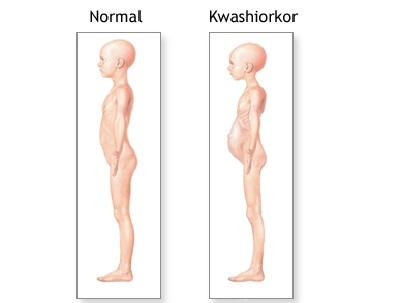 Malnutrition caused by lack of intake shows Marasmus signs. The person is thin. When disease plays a part, you often see Kwasiorkor: the weight loss is being masked by fluid retention in the body.

Loss of lean body mass has a negative effect on the organ function, wound healing, immune response to infections, healing and a longer hospital stay.Complications as a result of malnutrition:

Prevalence of malnutrition in a clinical setting

Studley (1936) was the first who showed that weight loss is a risk factor for post-surgery complications. In post-surgical patients weight loss of more than 20% was associated with a higher mortality level: 33%. Mainly as a result of increased infection rates. Ever since many studies have been published that showed that in developed countries malnutrition occurred in a lot of hospitalised patients.

The large variation is caused by the use of different definitions of depletion.